State of the University: Challenges, opportunities and optimism for the future

Thank you, Professor Quillen, and thanks to everyone for taking the time during a packed first week of classes to join me – both here in person and on streaming video.

Welcome to the new academic year! For faculty members, I hope your summer was restful and restorative, and that you are enjoying greeting colleagues, gathering with your students, and renewing your teaching and scholarship.

This has been an unusual start to the year, with the typical enthusiasm overshadowed by the white supremacist violence in Charlottesville less than two weeks ago, and concerns about the possibility of such an event here on our own campus.

As you are no doubt aware, we received a request to reserve space for a speaking event featuring white supremacist leader Richard Spencer. Spencer’s beliefs are appalling and I denounce his racist and hateful claims. However, we denied the request not based on his words, but rather the real threats of violence and injury – as occurred in Charlottesville and was threatened in Gainesville.

Across the country, racists are attempting to use public university campuses to push their dark agenda. I want to state forcefully that we are institutions that every day exemplify the exact opposite of that agenda. We are places where people of every religion, background, race, gender, sexuality and other differences not only exist together peacefully, but also celebrate our differences, find common ground and ultimately experience friendship and love for one another.

I was reminded of this a couple of weeks ago at our Summer Commencement. I had chosen friendship as my theme for the undergraduate and master’s commencement address. Before the ceremony, I asked students and alumni to share photos and stories of their best friends at UF on Twitter … in social media parlance, their “#UFBFFs”. Many, many people tweeted responses, and we displayed them during the commencement ceremony.

As you can see, the photos and comments I received were from an immense breadth and diversity of alumni and student best friends. 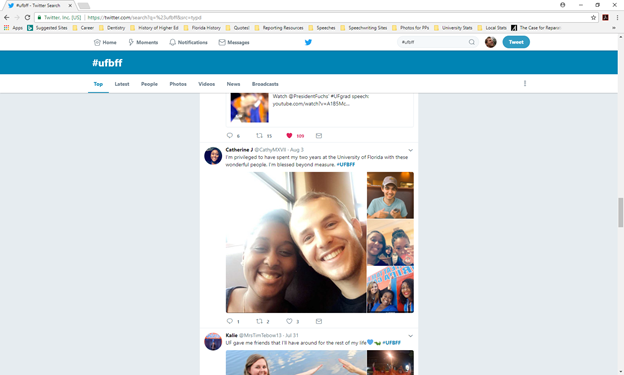 I had an op-ed published in The Tampa Bay Times earlier in the summer that was picked up and distributed by a number of higher-ed consortia, including by the AAU, APLU, and ACE. It was a response to a shocking Pew Research Center survey that found 58% of Republicans and Republican-leaning independents believe colleges and universities are having a negative effect on the way things are going in the country, while just 36% say the effect of colleges and universities is positive.

My argument in the op-ed was that public and especially land-grant universities are a melting pot whose communities will help bring our nation back together.

“Here … these scenes happen again and again. A combat veteran using his GI Bill sits next to a young woman in a hijab [“HEH-jab”]. A single mother working to give her children a brighter future shares a lab bench with the daughter of an investment banker from West Palm Beach. A young man from a fifth-generation ranching family heads for a lecture hall and parks his scooter next to the daughter of a teacher and a police officer.”

This is part of our mission, our DNA, and I believe represents great hope for our nation’s future.

With that, I’d like to move to a few challenges facing our university, some exceptional accomplishments, and my tremendous optimism and excitement about the future.

I’ll start with my concerns, which are at the national level and shared by other research universities.

Second, I am concerned about federal proposals to reduce funding for university research, for example, the possibility of reductions to the budgets of the NIH and NSF. Federal research funding has been fundamental to the discoveries that drive our economy, as well as to our nation’s universities leading the world in both scholarship and education. The United States must double down on its investment in fundamental university research if we are to be safe, secure, and have a nation where all can prosper.

Finally, I am concerned about federal government proposals that cut reimbursements for F&A, or facilities and administration, sometimes called indirect cost or overhead.

Administration and facilities attributable to sponsored research cost UF more than $1 for every $2 spent directly on research. Any reduction in the reimbursement of those would impact our ability to provide such necessities as electricity for laboratories and libraries for scholars. This would force a choice between subsidizing federal research with tuition and state allocations or simply ceasing it.

Now, let me share some of the accomplishments of the University of Florida this past year, and the great optimism and confidence I have in our future. 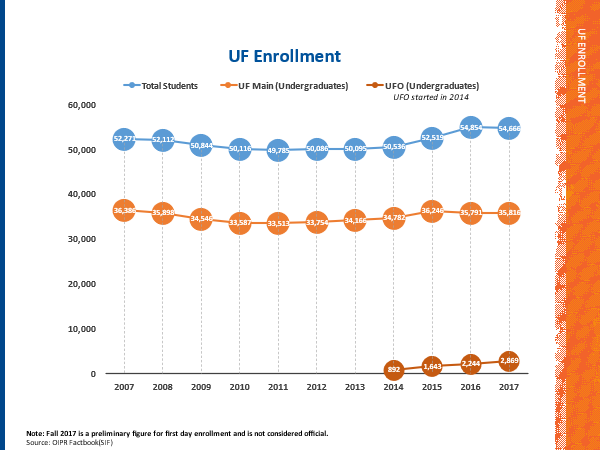 I am very comfortable with these numbers overall.

I’ll introduce only six of our other new leaders. When I call your name, please stand. I ask the audience to hold your applause until all six are standing.

I am also happy to announce that after a year-long process to identify an organizational structure to enhance diversity and inclusion at UF, we will create the equivalent of a new chief diversity officer. The person in this role will serve as a senior advisor for inclusive excellence. This position was identified through a robust process that included interviewing scholars and leaders from throughout the country; reviewing best practices at other universities; and—of course—talking to our own faculty, staff, and students about ways to help support a welcoming climate for all. The search will begin this fall. I am grateful to the workgroup that led this effort, as well as everyone else who shared their thoughts and ideas that influenced this addition.

Let me now speak briefly to our resources. I’ve previously mentioned the good news concerning philanthropy and research. This spring, the Florida Legislature provided $52M additional funding to hire new faculty, provide merit and market-based compensation increases, and invest in graduate programs and graduate stipends. We also received $33.5M for new and renovated facilities, and additional funding for building maintenance. As you have likely heard Provost Glover and me say, we are committed to growing the UF faculty by 500!

Let me put those allocations into perspective.

As you are aware, UF and all other universities, both private and public, suffered budget reductions during the great recession of 2008-2010. Our revenues began to rise again in 2012. The Legislature’s allocations this spring continue this positive trend, and we are making real and measurable progress against the very best public research universities. 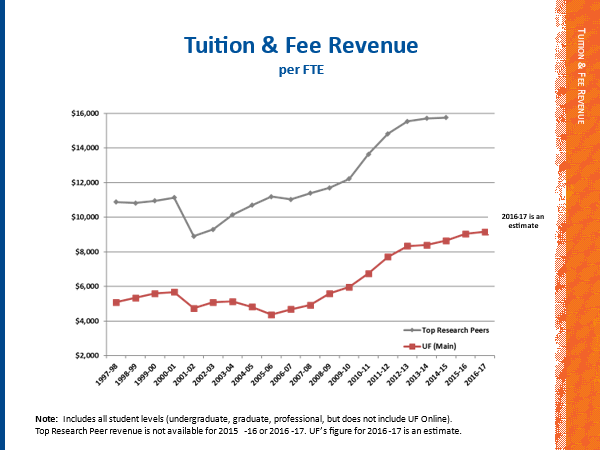 Nationally, our top public research university peers receive far more dollars in tuition than UF per student FTE, as you can see on this graph. In 2001-02, our peers began steadily raising tuition while our tuition stayed relatively flat. By 2014-15, UF’s tuition and fees were dramatically below our national peers. 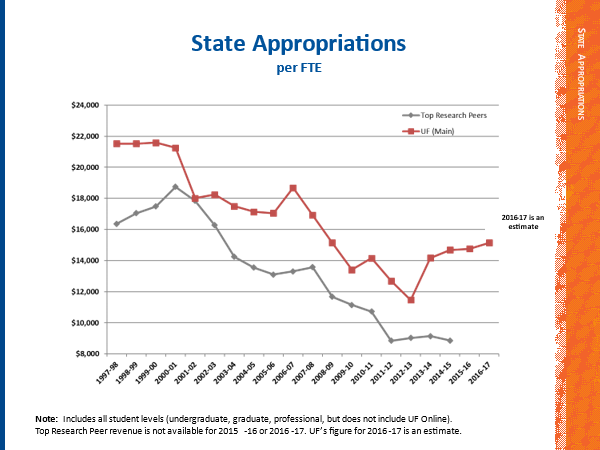 Thanks to those rising appropriations, UF’s total revenue – this is state appropriations and tuition combined – began climbing steeply beginning in 2012. We are on a trajectory to surpass our best public research university peers. We receive about $1 billion each year in student tuition and fees and state allocation combined.

How have these trends affected our staff and faculty numbers? 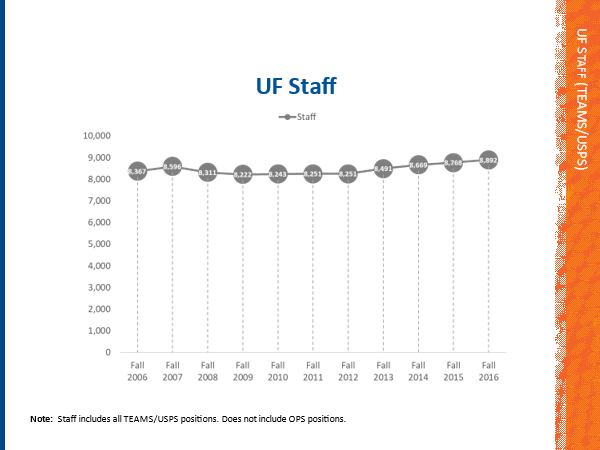 We lost staff during the depth of the economic downturn, declining to a low of 8,222 staff members in fall of 2009. We’ve steadily regained staff since then, and as of 2016 have 8,892 staff members – up six percent from a decade ago before the downturn. 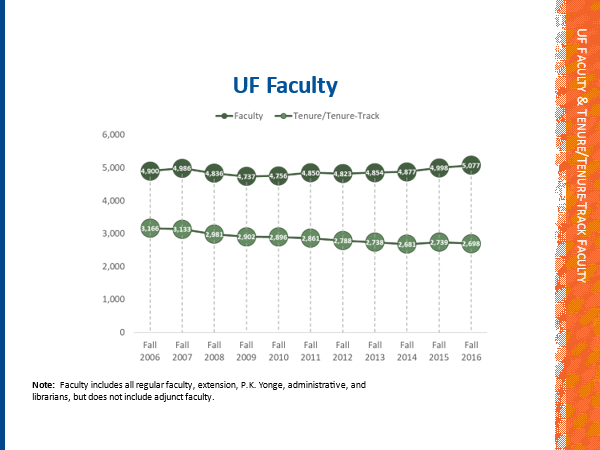 Regarding total faculty, our numbers have remained relatively stable, even increasing slightly. However, for tenured and tenure-track faculty, we have seen pronounced losses. Five hundred additional faculty will reverse these losses. Although not shown here, the faculty reduction negatively impacted our student-to-faculty ratio. A year ago we were the worst in the AAU. The growth in 500 faculty will put us in the top-10 publics in faculty size compared with student-body size.

Finally, I’d like to update progress on our strategic plan: A plan which includes our aspiration to be ranked among the very top of all public research universities. 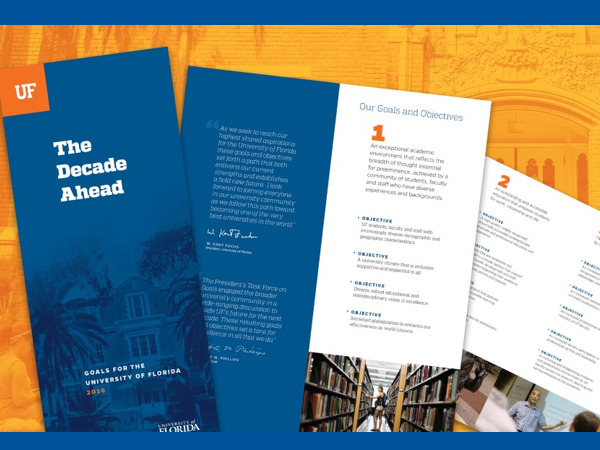 In 2015 Dr. Win Phillips led a task force that produced our overarching plan with its seven goals, multiple objectives and this single guiding aspiration: “The University of Florida will be a premier university that the state, nation and world look to for leadership.” 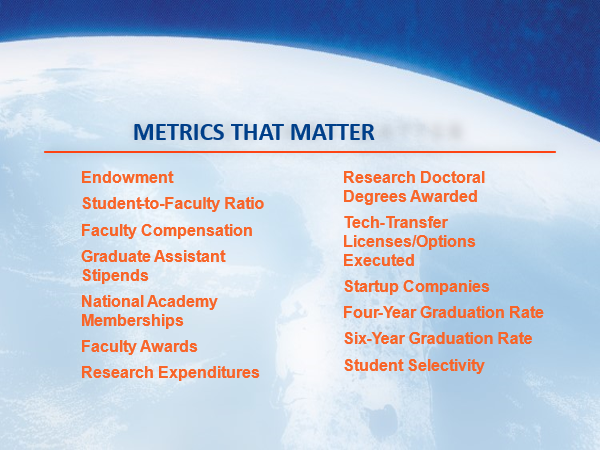 As the next step in measurably increasing our stature, our excellence and our ranking, we established 13 “metrics that matter” – yardsticks for which we have information on our peers and are critical to excellence and the rankings of all major research universities.

These metrics highlight both the areas where UF already ranks at the top of the nation’s very best public research universities, such as technology transfer and commercialization, and those where we need to become more competitive, for example in the size of our endowment and the student-to-faculty ratio.

When you entered the ballroom you should have received this one-page document. I use this when I address the Board of Governors or meet with elected officials. It concisely summarizes our accomplishments of the past year and describes our goals for the future, with a particular focus on the metrics and our timeline. As I review this document, I am inspired by the stature of our great university and am filled with excitement and optimism about our future.

When students ask me to tell them the secret to success in college or the secret to leadership, I always share the same two words: Persistence and Patience.

I know that we have the persistence and the patience to achieve our aspirations of reaching the very top of all public universities.

We are not just on a journey, but more of an expedition up a mountain. Like all climbers, we must rely on one another. By advancing together, as faculty, staff, students and alumni, we will reach the peak and plant the Gator flag.

I conclude with a simple statement of gratitude. I am so grateful for the opportunity to be your colleague, to dedicate myself with you to our students, to each other, and to the University of Florida. Thank you for the privilege of working with you and learning so much from you. It is great to be a Florida Gator.